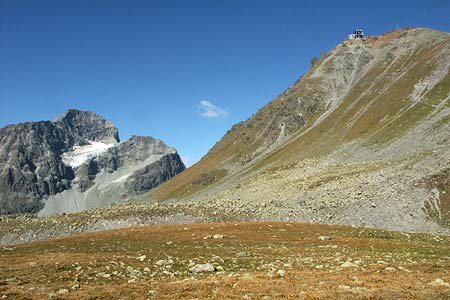 Corviglia does suffer from some visual pollution from the many ski-lifts and other infrastructure constructed in recent years. However as the walk progresses the visual impacts fade and despite the cablecar to the summit of the Piz Nair you enter mountain scenery with the finale a descent to Suvretta Pass.

Start - The upper station of the Corviglia Funicular, which offers connections to St Moritz with its many train and bus routes. Alternatively you can use the cableways that ascend from the valley at Celerina.

From the upper station of the Corviglia funicular follow the signs to Pass Suvretta. Initially the route follows rough tracks in a northwesterly direction climbing steeply for a short way. The Piz Nair cable car is to your left. At the first signed junction go left to continue along a track (Note - in 2003 this was poorly signed and in places the path was severely disrupted due to construction work). The path goes beneath the Piz Nair cable car with excellent view across the Upper Engadine valley to Piz Bernina.

Maintaining a steady height across the mountainside the track reaches the upper station of the Signalbahn chairlift. Shortly afterwards a well-signed path leaves the track. To your right the rocky slopes of Piz Nair rise steeply. Ahead shapely Piz Julier with its small glacier looks very spectacular. Turn right at the next indistinct path junction to begin the ascent to the summit of Piz Nair.

The path, after a gradual traverse across intermittent scree, climbs steeply using zigzags to ease the gradient. You pass under the cablecar for the final climb to the summit ridge. Once the ridge is gained the gradient eases for the final pull to the summit. The views are excellent with Piz Julier probably keeping your attention.

Descend by the signed route to Suvretta Pass. The path is clear and, despite being loose underfoot in places, will bring you to the delightful surroundings of Suvretta Pass (2615 m.) with its beautifully located lake.

A pocket field guidebook for identifying 230 of the most commonly found alpine flowers of the Alps. Categorised by colour for quick identification, each alpine flower has a photograph and description of its key features. Flower names are given in English, French, German, Italian and Latin, with notes on curious facts and origins of names.

Guidebook to the Alpine Pass Route following the Swiss Via Alpina 1, a 360km trek east-west across Switzerland, from Sargans, on the border of Liechtenstein, to Montreux, including prologue from Liechtenstein. A demanding 3-week trek described in 18 stages, crossing 16 passes including the 2778m Hohtürli. Requires good fitness and experience.

Do enjoy yourself when out walking and choose a route that is within your capabilities especially with regard to navigation.

Do turn back if the weather deteriorates especially in winter or when visibility is poor.

Do wear the right clothing for the anticipated weather conditions. If the weather is likely to change for the worse make sure you have enough extra clothing in your pack.

Do tell someone where you are planning to walk especially in areas that see few other walkers.

Do take maps and other navigational aids. Do not rely on mobile devices in areas where reception is poor. Take spare batteries especially in cold weather.

Do check the weather forecast before leaving.

Do do not exceed your capabilities.

Please Note - These walks have been published for use by site visitors on the understanding that Walking Sitzerland is not held responsible for the safety or well being of those following the routes as described. It is worth reiterating the point that you should embark on a walk with the correct maps at the most detailed scale where possible. This will enable any difficulties with route finding to be assessed, and corrective action taken if necessary.