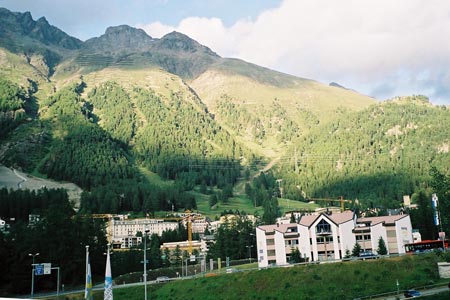 Piz Languard (altitude 10,702 feet, 3,262 metres) is a mountain in the Graubunden canton in south-east Switzerland, near to the border with Italy. The nearest village is Pontresina, which has a railway station from where, the tip of the peak of Piz Languard can just be seen behind a mountainous massif. At an altitude of 5,922 feet (1085 metres), Pontresina is already higher than Ben Nevis, the highest mountain in the UK at 4,409 feet. It takes some visitors to the region a day or two to acclimatise to the change of altitude and, even experienced and fit walkers may feel unexpectedly tired to begin with before making the necessary adjustment. Patches of snow are seen on the mountains in this area even in summer. In clear visibility, navigation should present no difficulties as there is a clear path all the way to the summit from the top of the chair lift. This walking route leads to the top and then returns by a route which, instead of reversing the outgoing route in its entirety, offers a slightly different way back, by way of variation. As an alternative, some walkers may prefer to do the whole walk from valley level by omitting the chair lift.

This description is based on my own experience of having done this walk in the summer of 2006. Seen from the top of the chair lift at Alp Languard (7,644 feet, 2,330 metres), the peak of Piz Languard dominates the view ahead, appearing starkly as a pyramid shape with a more or less sheer face at the front and snow patches below, about half way down. A signed footpath indicates the way ahead. The path traverses grassy and rocky slopes with the peak of Piz Languard clearly in view ahead and, looking back, the lake of St Moritz (the Moritzersee) can be seen next to woods with clusters of houses nestling by its shore. With the main objective of Piz Languard towering ahead, the path switches diagonally uphill to the left.

Entering a stony area with the cliffs and screes of Piz Languard now arresting the attention to the left, the respite from going uphill is brief. A tongue of scree is seen below the cliffs of Piz Languard to the left and from this point it may appear a daunting prospect to reach the top; however, there is a clear way up and the next key part of the route is revealed shortly. A few gentle zig zags lead to a point where it is now time to gain some height in earnest in the form of a series of more zig zags up between loose rocky slopes. The view opens out to reveal a pretty turquoise mountain lake below to the right, Lac Languard, backed by snowy peaks with screes and snow patches. Yellow signposts appear from time to time confirming that you are going the right way for Piz Languard. The path is the one sure and safe way of making progress up this steep, rocky section of mountain and, in some places, it has been reinforced with stone slabs.

The zig zags end as the path levels out to reach a mountain hut refuge. St Moritz and its lake are now seen way below. Initially, the top of the mountain from here looks like a pyramid of almost sheer rock. However, a clear path leads the way up, crossing boulders in the last few moments before the summit area is reached to reveal a tremendous all-round view of the mountains of the Upper Engadine area. The more distant mountains in particular tend to be snow-covered with the occasional glacier.

The mountain hut is about a ten minute walk short of the summit and some walkers may be content to go this far only if they are liable to be out of their comfort zone in the remaining part of the walk which, although there are no sheer drops, may not be to everybody's liking since the ground does drop away fairly steeply and you have the sense of being very high up, an impression assisted by the summit plateau which is in the form of a rock platform, well-marked with a sizeable cairn. The mountain hut can be seen from near the top in a view which gives the feeling of teetering on the edge of a massive drop, though in fact, this is not the case, although the ground does fall away steeply down loose, rocky slopes. Anybody with a reasonable head for heights, and who sticks to the path, should be fine. As a point of note, if anybody does suffer from vertigo, the drop down to the ground from the chair lift is easily the "scariest" bit of the whole outing.

On the way down, having walked back down the zig zags, it's time for the route to take a different course for part of the return route. Follow a path down into the Val Languard, and then up the other side to reach another mountain hut, the Paradis Hutte, which offers refreshments for sale and another view to savour. From here you see Piz Languard in retrospect across the Val Languard (Languard Valley). A path down the ridge, crossing a mountain stream, leads you back to the main path you came up earlier and so back to the top of the chair lift.

A guidebook to walking the The Tour of Monte Rosa, a 9-10 day, 134km trek circling Monte Rosa anti-clockwise from Zermatt. The high route hugs glaciers and has views of over ten 4000ers. All essential information is provided, including outline maps, route profiles, advice on glacier crossing and accommodation.

Guidebook to the Alpine Pass Route following the Swiss Via Alpina 1, a 360km trek east-west across Switzerland, from Sargans, on the border of Liechtenstein, to Montreux, including prologue from Liechtenstein. A demanding 3-week trek described in 18 stages, crossing 16 passes including the 2778m Hohtürli. Requires good fitness and experience.

Do enjoy yourself when out walking and choose a route that is within your capabilities especially with regard to navigation.

Do turn back if the weather deteriorates especially in winter or when visibility is poor.

Do wear the right clothing for the anticipated weather conditions. If the weather is likely to change for the worse make sure you have enough extra clothing in your pack.

Do tell someone where you are planning to walk especially in areas that see few other walkers.

Do take maps and other navigational aids. Do not rely on mobile devices in areas where reception is poor. Take spare batteries especially in cold weather.

Do check the weather forecast before leaving.

Do do not exceed your capabilities.

Please Note - These walks have been published for use by site visitors on the understanding that Walking Sitzerland is not held responsible for the safety or well being of those following the routes as described. It is worth reiterating the point that you should embark on a walk with the correct maps at the most detailed scale where possible. This will enable any difficulties with route finding to be assessed, and corrective action taken if necessary.